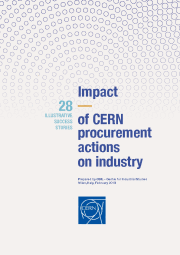 CSIL conducted an in-depth study on the channels through which knowledge and technological spillovers affected companies selected as suppliers for CERN concerning the construction of LHC particle accelerator and other CERN research programmes. To this end, CSIL conducted several interviews with CERN supplier companies, collected and analysed evidence on impacts on the market, technology innovation level, and, where possible, quantified them in economic terms. The final study report consists of a booklet titled "Impact of CERN procurement actions on industry".